“Zukor’s Grind is a quantum leap
forward in feedback games.” 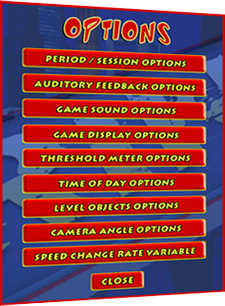 Zukor’s Grind offers an unprecedented amount of features, options and customizability to fit the needs of the individual clinician’s feedback training style, as well as the unique needs of each patient. Clinicians frustrated by current feedback games’ lack of options will be amazed to see that Zukor’s Grind has 9 separate areas of options, each of which have up to 55 individual choices.

Clinicians use varied neurofeedback and biofeedback protocols, so feedback games should be flexible as well. Zukor’s Grind does just that and allows the clinician to adjust the game to fit their individual needs. This extensive level of choice and control provide myriad benefits for both clinicians and patients, including those discussed below. 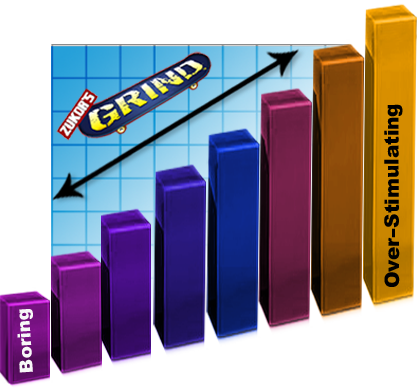 Interesting, but not over stimulating

Clinicians in the field of neurofeedback have varying opinions and preferences about the level of visual and auditory complexity and stimulation needed for patient feedback options. Some clinicians and patients prefer a simple environment, keeping the stimulation level at a minimum. Others prefer some complexity to the feedback, as found in games, but do not want anything too stimulating.

Zukor's Grind is unique in that the clinician can tailor the complexity and involvement of the game to meet the clinical needs of each patient. Zukor’s Grind effectively allows the clinician to “dial up or dial down” the stimulation level to suit their neurofeedback training beliefs and/or the needs of individual patients.

The clinician can achieve this through the abundant options built into the game, such as increasingly sophisticated levels, standard and fantasy characters, night or day mode, plus dozens of additional game variables the clinician can easily control.

Moreover, the gameplay in Zukor’s Grind is low-intensity and inherently neutral and balanced in terms stimulation. The competitive element in most modern video games is not present in Zukor's Grind, because it is designed as a single player game with the goal of succeeding in the moment rather than racing on a track or "beating" another player.

Instead, Zukor’s Grind offers a skateboarding activity in which the goal is obtaining an “optimal” speed, not too fast and not too slow. Thus, the gameplay dynamic of Zukor’s Grind mimics the goal of most neurofeedback protocols, which is to find a balance.

The only goal of Zukor's Grind is to meet the conditions set by the clinician in order to achieve an optimal speed, do tricks and earn points. Success in the game is driven by the protocols and thresholds defined by the clinician in their neurofeedback or biofeedback system software.

"This game is more interesting. I can tell the changes in my focus better with the speed meter rather than bar graphs." 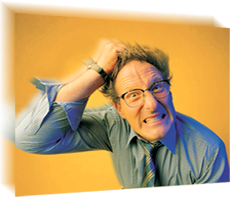 One of the main complaints we have heard from clinicians is that the currently available feedback games quickly become an irritant to the clinicians themselves. Sometimes the culprit is certain unpleasant game-related sound, such as obnoxious game background music, which can’t be turned off without effecting all the other sounds. In other cases it’s the simplistic graphics or illogical dynamics of the basic gameplay. These and other annoyances can significantly impact clinician fatigue during back-to-back neurofeedback sessions.

Clinicians will find flexibility, variety and even enjoyment while working with patients all day using Zukor’s Grind. Furthermore, many of the visual elements inside the game, such as Stonehenge, the Easter Island Moais and others, were included to amuse the clinicians as well as their patients.

"Feedback games are very useful, but I always hated using the same feedback with back to back clients since the repetitive and unchanging nature of most feedback games can be tiring by the end of the day. Zukor's Grind gives me the ability to change sounds and graphics, so I am able to tailor the game to meet my clients' needs and vary the clinical environment for myself in the process." 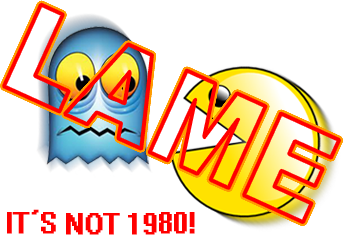 Not an adapted video game

Zukor’s Grind is not a video game adapted for use as a feedback game. Rather, it is a sophisticated audiovisual feedback tool which incorporates only appropriate and productive video game techniques. To some extent, it’s not what’s in Zukor’s Grind that’s important, it’s what is excluded, since most concepts employed in mainstream video games are counter-productive for neurofeedback training.

For Zukor’s Grind, we evaluated mainstream video game features one-by-one and incorporated only those that fit the unique requirements for an effective neurofeedback game. Then, we made as many of these elements as possible customizable so the clinician could adjust the game to their needs.

"This is better than ____ ____. It’s not so boring. I like this because it has people,
aliens, and zombies. I especially like the shark!

"Radioactive chickens and zombies in goo. This game is better than the others,
because it has more detail and options."

Zukor’s Grind offers extremely intuitive gameplay logic which is critical to a patient’s ability to focus during their neurofeedback training sessions. An effective feedback gameplay dynamic should not have to be explained to the patient, because this requires them to think rather than relax and focus. Rather, the gameplay should be obvious and mirror the real world, as well as be logically consistent within the game. In all these areas, Zukor’s Grind excels.

Reinforcing intuitive gameplay is the need for the feedback game to be instantaneously responsive to changes in input variables (EEG or biometric). Zukor’s Grind is able to accept and process input at the same rate as the neurofeedback or biofeedback system software, so changes in the gameplay are directly reflective of the state of the patient at any given moment.

Zukor’s Grind offers traditional and innovative new styles of threshold meters from which the clinician can chose. However, if a feedback game contains meaningful, interesting and intuitive gameplay, then traditional threshold meters, as part of patient feedback, become unnecessary or even counter-productive. In general, threshold meters are non-intuitive as they have to be explained to the patient, often repeatedly. Indeed, in our clinical testing, we found this to be the case and for most patients the threshold meters were turned off so the patient could instead rely on the gameplay itself for feedback.

With Zukor’s Grind the gameplay is interesting, intuitive, instantaneous and meaningful. This allows patients to remain focused on attaining the desired state rather than trying to figure out the gameplay or understand multiple cryptic meters moving up and down.

"I like the speed meter. It helps me to know what I am doing wrong and to refocus, better than the thresholds. I can tell when I look away and lose focus and help me stay focused. Better than that ____ ____ one."

"I like the night time mode. It looks neat! I like it with just the speedometer. It helps to look at the star in the speed meter to keep the skateboarder doing tricks."

Many clinicians report that some of the biggest challenges they face in working with patients, especially with kids, are:

1. Getting the patient to focus during a feedback session.

2. Getting the patient to come back for their next appointment. 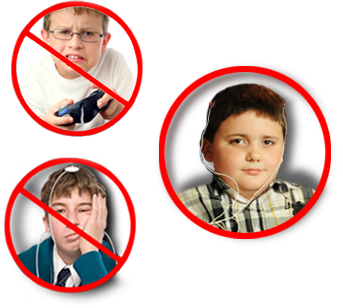 "Great graphics! On Level 3, nice way to include zombies, aliens, Stonehenge and
the monolith. I like the Indian on a Segway. I like the Score Screen with high scores
to compete against. The game at night is best!"

"What I liked about the game was that the character moved around in the environment.
My favorite part was the techno chicken!" 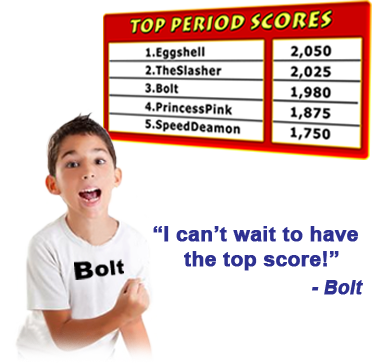 In addition to multiple unique levels and many customizable game settings, Zukor’s Grind’s multi-faceted, built-in incentive system helps keep patients focused during their neurofeedback session and also highly motivated to return. Zukor’s Grind’s incentive system includes patient selectable “nicknames,” period and session scores calculated in multiple ways displayed on a separate Scores screen, a “Top Scores” feature from which patients can compare their scores to other patients (via their nickname only) and a printable Scores screen which patients can take home.

Through these features and options, Zukor’s Grind will help get patients, especially the kids, to come back for their next session. This also essentially extends the practical usefulness of the feedback game for each patient. “I used to have to literally bribe the kids with toys and even money to get them to return for each session,” notes that same clinician. “Now, they want to come back to play Zukor’s Grind again.”

"Zukor’s Grind is so much better to play over and over than _____ _____ and the other
neurofeedback games. I don’t get bored and it is fun to try to get a high score each
period. The tricks are pretty cool also. Next time I want to move up on Top Scores. I am
currently in 4th place."

"I really like trying to beat mine and others people’s scores."

Feedback game protocols possible for research or clinical use

Since Zukor’s Grind provides clinicians virtually complete control of the game feedback features, clinicians can now "tailor" the feedback the same way they "tailor" the frequencies, time and placement sites trained during a neurofeedback session.

These "tailored" changes to Zukor’s Grind feedback settings may be discovered over time by clinicians to be effective when training a particular type of dysregulation or client issue, thereby resulting in a type of "feedback game protocol" to follow when setting up Zukor’s Grind. Examples of these types of protocols or "tailored" changes, include using the daytime mode or multiple levels with under-activation issues and using night time mode or a single level with over-activation or instability issues. Another example is turning all objects off with over-activation or instability issues and conversely leaving all objects on with under-activation issues.

Using the vast array of options available in Zukor’s Grind thus offers clinicians the flexibility to change the game feedback enough to develop an actual "feedback protocol" for each type of dysregulation. 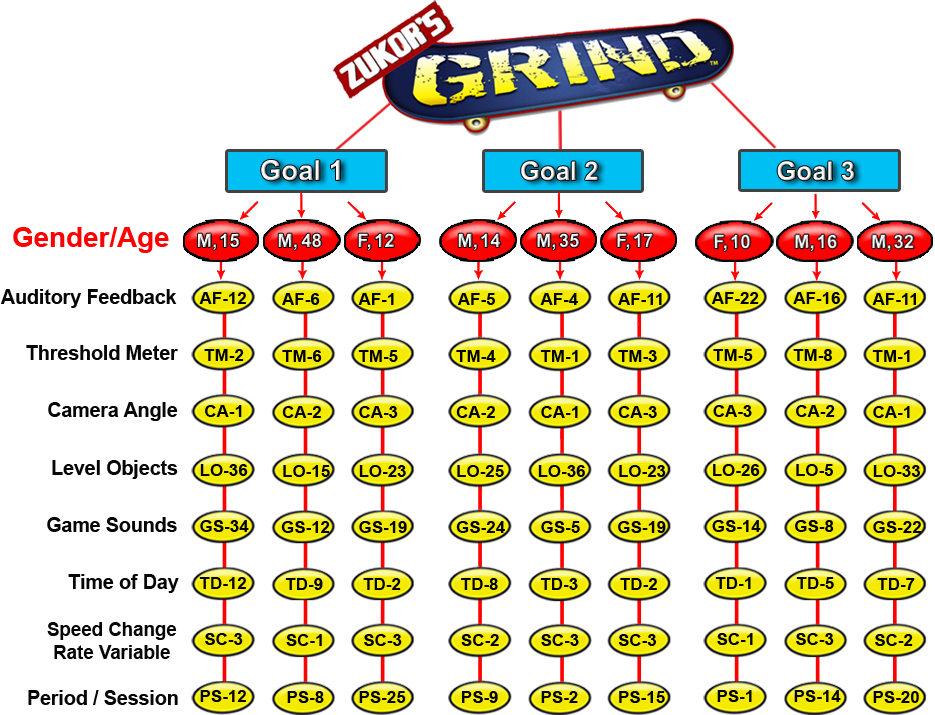